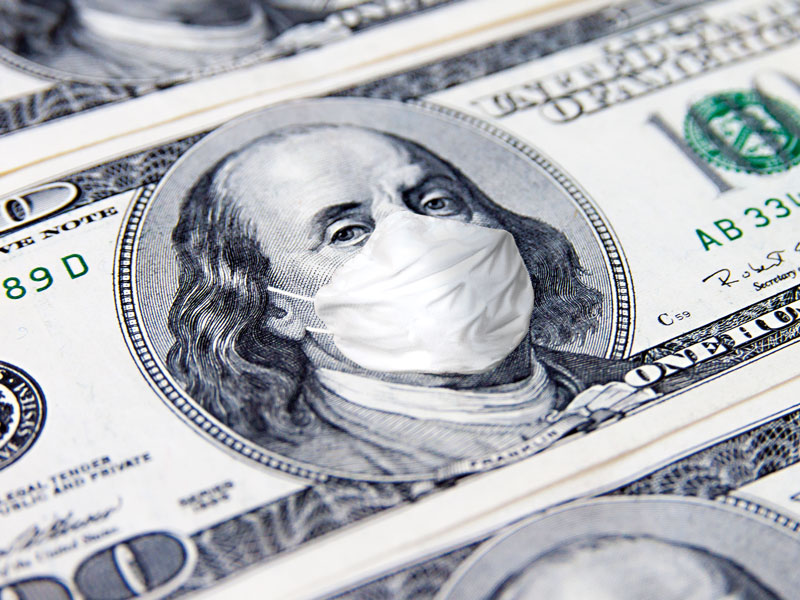 Just over a year ago, financial markets were staring into a dark abyss. Entire nations had been locked down, the retail industry was on its knees and an unemployment apocalypse was raging. Fear was king and the world economy seemed destined for another Great Depression. But it turns out that even a global pandemic is no match when governments and central banks join forces to fight a crisis.

The combination of extravagant government spending and ultra-low interest rates was so incredibly powerful that it eclipsed everything else, restoring peace to global markets. Once the vaccines were announced too, investors could finally see the light at the end of this nightmare and a sense of euphoria took over.

Fast forward to today. Most economies are healing their wounds, yet some are recovering faster than others, thanks to a divergence in the amount of fiscal firepower deployed and the speed of their vaccination programmes. Among the major regions, Britain and America are miles ahead of Europe and Japan in the immunisation race. This discrepancy is increasingly being reflected in the performance of their respective currencies, as markets recalibrate their expectations for economic growth and the timeline of monetary policy normalisation.

Pandemic heroes to vaccine zeros?
Shortly after the pandemic rocked the world, Europe was being praised as having one of the most effective responses. Early and tight lockdowns went into force across the continent, while governments enacted powerful relief programs to support businesses and jobs. It seemed as though the euro area would weather the storm much better than anyone else.
This rosy narrative didn’t age well. Most of the Eurozone was soon hit by a bigger wave of infections, resulting in a fresh round of shutdowns that were not accompanied by the powerful stimulus measures we saw the first time around, crippling several economies. Adding insult to injury, the EU Recovery Fund money still hasn’t been distributed to struggling member states, and Europe’s vaccine rollout has been a catastrophe mired in setbacks and inconsistencies. European regulators were slow to authorise vaccines for use and the EU was slow to negotiate contracts with manufacturers, sparking severe supply problems and delays.

Naturally, all this has taken the wind out of the euro’s sails. Market participants seem to have concluded that the Eurozone’s economic recovery will be lacklustre compared to other regions, which ultimately translates into the European Central Bank being among the last to raise interest rates again. Whether the euro can stage a comeback will depend mostly on how much the pace of immunisations is ramped up over the coming months and whether consumers truly go on a spending spree once the lockdowns are finally lifted.

The yen is in the same boat as the euro. The Japanese currency has taken a beating so far in 2021 as yield differentials widened against it, diminishing its appeal. The biggest theme in the markets this year has been the relentless rally in bond yields, driven by expectations for a robust global recovery. Unfortunately for the yen, the Bank of Japan keeps a ceiling on domestic yields through its yield curve control strategy, so the currency tends to suffer in an environment of rising foreign yields as interest rate differentials widen against it.

Furthermore, the ecstatic mood in stock markets is a curse for the yen, which has a reputation for being a safe-haven asset. But perhaps more importantly, Japan’s vaccine rollout has been even slower than Europe’s. Even though the nation weathered the pandemic quite well, with infections and deaths being far lower than most Western countries, it was painfully slow in giving the regulatory green light to vaccination shots. Consequently, it lagged behind in placing orders for vaccines, which are in short supply as nations compete to secure them (see Fig 1).

In the end, this implies that Japanese businesses and shoppers are going to live under the shadow of the pandemic for much longer than anyone else, even if the severity of the domestic health crisis wasn’t as great. Outside of a new virus mutation that is highly resistant to the existing vaccines, or some other unforeseen shock that hits global markets and sparks panic, it is difficult to envision what can turn the yen’s fortunes around. UK crowned vaccine champion
Among the G10 players, the UK has earned the title of undisputed champion in the immunisation race. British authorities ‘bent’ several regulatory rules to expedite the approval of the vaccines, which allowed the country to be almost first in line when placing orders with manufacturers. The National Health Service did the rest, delivering a stunning number of jabs in just a few months. At this pace, the nation’s entire adult population will have received at least one shot by the middle of the summer.

Even though the domestic economy has been struggling thanks to the prolonged shutdowns, the incredible speed of vaccinations has convinced investors that better days lie ahead. This has catapulted the pound higher this year, with fading expectations for any further Bank of England rate cuts and receding Brexit risks adding fuel to the rally. Sadly though, political risks haven’t disappeared and may still come back to haunt the sterling. A deal on financial services with the EU hasn’t been reached yet, and voices for another independence referendum are growing louder again in Scotland after recent local elections.

Another under-appreciated risk hovering over the pound is the quality of vaccinations. Coronavirus vaccines are not created equal, and while the island nation is on track to immunise its citizens quickly, it has done so mainly with the Oxford/AstraZeneca vaccine that is less effective against the new variants. Hence, there’s a threat of cases exploding again as Britons return from their vacations abroad, which may catch markets by surprise. Even in this case though, it is questionable whether that would be enough to derail the overall uptrend in sterling.

The return of ‘king dollar’
The US initially experienced one of the worst outbreaks in the developed world, yet its economy remained resilient throughout this calamity. The Fed was one of the few central banks that had any real room to cut interest rates, and it also acted boldly through its enormous asset purchases to ensure that the economic crisis did not mutate into another financial crisis. Additionally, the politicians in Congress unleashed an overload of federal spending to shield the economy, and the Biden administration is working on delivering even more.

The sheer amount of stimulus that has been rolled out is simply unprecedented outside of wartime. Helping matters further, the lockdowns of most American states were fewer and shorter compared to those in Europe, allowing businesses to stay on their feet. But perhaps the best part is that the nation’s inoculation programme is firing on all cylinders. At this rate, most Americans will have received at least one vaccine jab by early summer, which is a tremendous logistical victory for a country of such size.

It’s not just the impressive speed of US vaccinations, it is also the quality. Unlike Britain and Europe, the US has deployed only the very best vaccines, which have proved effective against almost all variants so far. Therefore, America’s immunisation programme seems to be the most ‘bulletproof,’ allowing for a sustainable reopening of the world’s largest economy. It will probably be a stellar summer in economic data, as the colossal stimulus measures and all the pent-up demand from unchained consumers come together to unleash a powerful spending boom.

Blending all these encouraging developments together, markets have become convinced that the Federal Reserve will be forced to raise interest rates by next year already to keep inflation under control, despite the Fed itself insisting that rates will stay on the floor until 2024. This has propelled Treasury yields higher, turbocharging the dollar in the process as interest rate differentials widen to its advantage once again. Looking ahead, whether the Fed sticks to its word or whether investors are proven right will be determined by how persistent the coming inflation episode will be. Ultimately, this will also decide the dollar’s fate.

Markets dance to the beat of vaccinations
All told, we seem to be in an environment where market participants reward the currencies of economies that have done the best job with the immunisation programmes and punish those that have lagged behind. So far, Europe and Japan have eaten the dust of Britain and America. The divergence has inevitably been reflected in the charts. Currency trading is a relative game after all. Until the world returns to something resembling normal, this dynamic is likely to persist. It’s all about vaccinations, and financial markets are now a hostage to this paradigm.